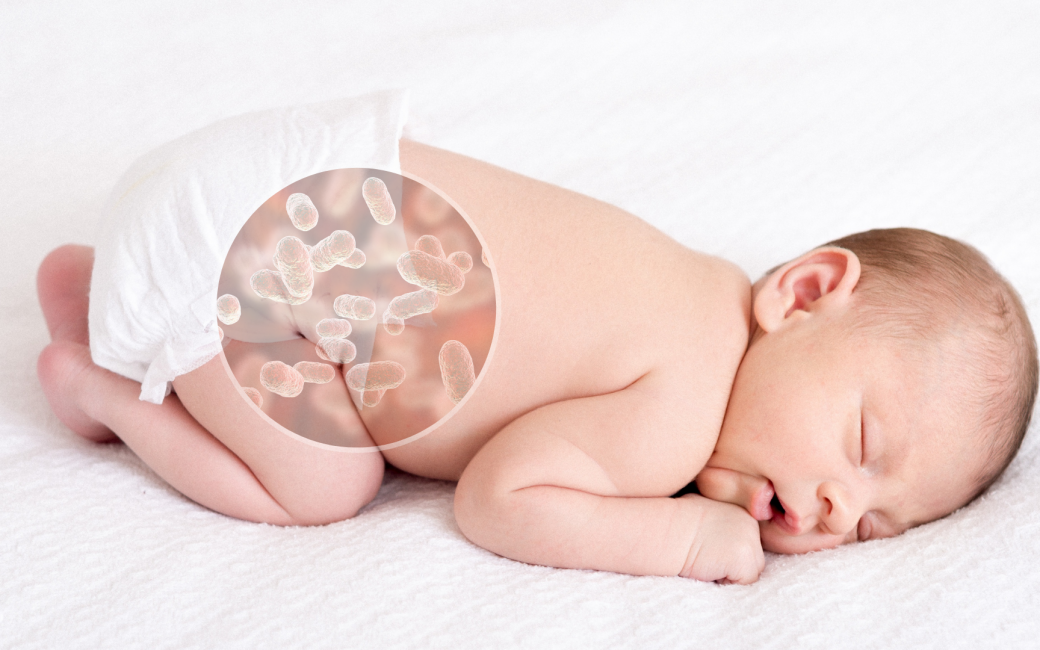 What Is The Infant Microbiome?

The infant microbiome is often misunderstood and its importance is greatly underestimated.
The microbiome seeding event at birth, immediately after birth and the months following, is vital for a baby and establishes the foundation of the infant’s immune system which has a lifetime impact on that child, later influencing immune function, nutrient absorption, digestion, hormonal function, metabolism, neurocognitive function, and even general moods.

About 80% of the immune system resides in the gut, which is colonized with trillions of bacteria of different kinds, both good and bad.
In adults, this ecosystem of bacterial colonies is already matured and abundant, but in an infant, this ecosystem is only beginning to form and it can take up to 3 or 4 years for a child’s microbiome to be properly established.

In the first 4 to 6 months after birth, an infant lacks the protective covering of good bacteria (known as probiotics) in their gut that prevents toxin and harmful parasites from entering the body. This is also commonly known as “open gut” in infants, meaning that small open pockets in the gut are present which allow direct access to the infant’s blood stream, increasing their susceptibility to sickness, infection and disease. The function of the colonization of good bacteria (probiotics) in the gut, is to fill in these little pockets, creating less opportunity for undesirable microbes to enter the baby’s body which may cause illness or disease.

The effective colonization of good bacteria in the gut also helps to “crowd out” any bad bacteria which creates a balanced microbiota in the gut, preventing any overreaction or under-reaction to gut stimuli in the infant. This is crucial for optimal immune function.

Certain good bacteria are even capable of producing certain vitamins (such as vitamin B and K). Other good bacteria in the gut help with the absorption of nutrients which is vital for an infant’s overall health, growth and development.

Some of these good bacteria produce neurochemicals, which is vital for the neurocognitive development of the infant and the development of neurotransmitters (chemicals responsible for carrying electric impulse messages between neurons from the brain to the body). Some good bacteria also influence hormone function.

A gut that is insufficient in the correct combination and balance of microbes can result in an immune system that does not develop correctly which can lead to a myriad of long term health problems, including type 1 diabetes, asthma, celiac disease, chronic hormonal dysfunctions, mood disorders, IBS, and more. 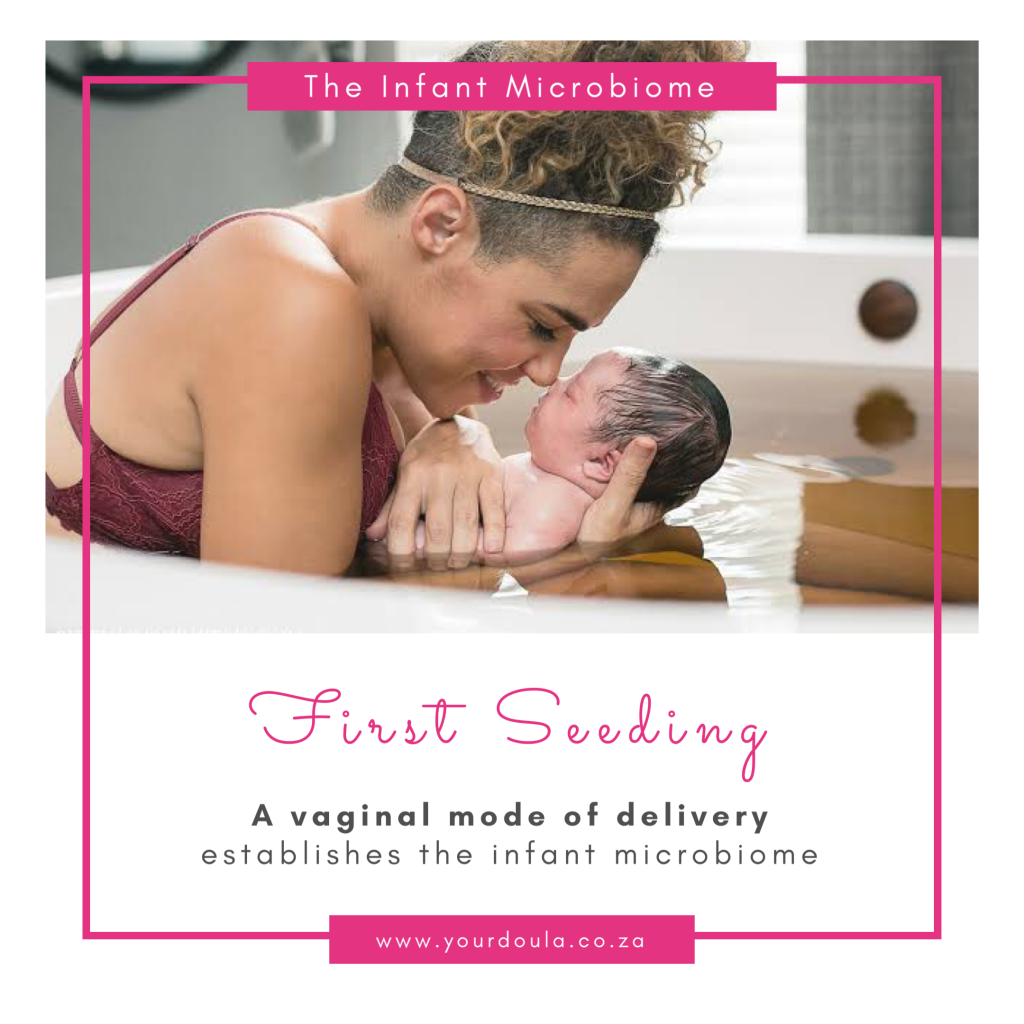 During pregnancy, the microflora in the woman’s gut and vagina changes in preparation for the birth of the baby; colonies of good bacteria rapidly multiply and strengthen while the mother’s own DNA and epigenetics in each bacteria is getting ready to be passed from mother to infant.

During birth, the baby passes through the vagina and millions of vaginal microorganisms totally encompass the baby. These same microorganisms will enter the baby’s body through the baby’s mouth, eyes, nose and ears.
This is the foundational introduction to the establishment of the infant’s microbiome.

This vaginal flora is intricately designed to pass on important, maternal-generational, genetic information to help the infant’s developing immune system identify and respond to undesirable microorganisms, while creating the foundation upon which the baby’s immune system will be established and matured from. This moment, of the baby passing through the vagina, is incredibly vital for the establishment of the infant microbiome and the baby’s first introduction to the living, microscopic world.

Quite often, before or during the onset of labour, a woman will experience rapid bowel movements, even diarrhea. Apart from the physiological purpose of “emptying the bowels to make space for the baby”, there is another crucial element to this event – the microscopic world of fecal matter.

The ideal position of a baby during birth is a posterior position; this means that the baby is facing backwards. This is so important for the microbiome. As, the baby’s head crowns and passes out of the vagina, its face (which is facing the mother’s rectum) is introduced to a whole world of microscopic fecal bacteria. This exposes the baby to both good and bad bacteria, perfect for the first “battle” of the immune system and to help the body identify which bacteria is good and which bacteria is bad.

Although efforts are being made to mimic this introduction for cesarean born babies (through vaginal swabs) there are still so many more benefits to a natural birth for both mother and baby. However, the fact that efforts are being made is extraordinary as it is working to protect the passing down of generational, maternal microbiota and minimizing long term health complications for the generations to come by protecting the development of the infant microbiome. However, these efforts should not be used as an excuse to minimize natural deliveries while promoting unnecessary cesareans either.

The best way to introduce an infant to the microscopic world and establish their microbiome, naturally, with the lowest risk, is via a vaginal mode of delivery. 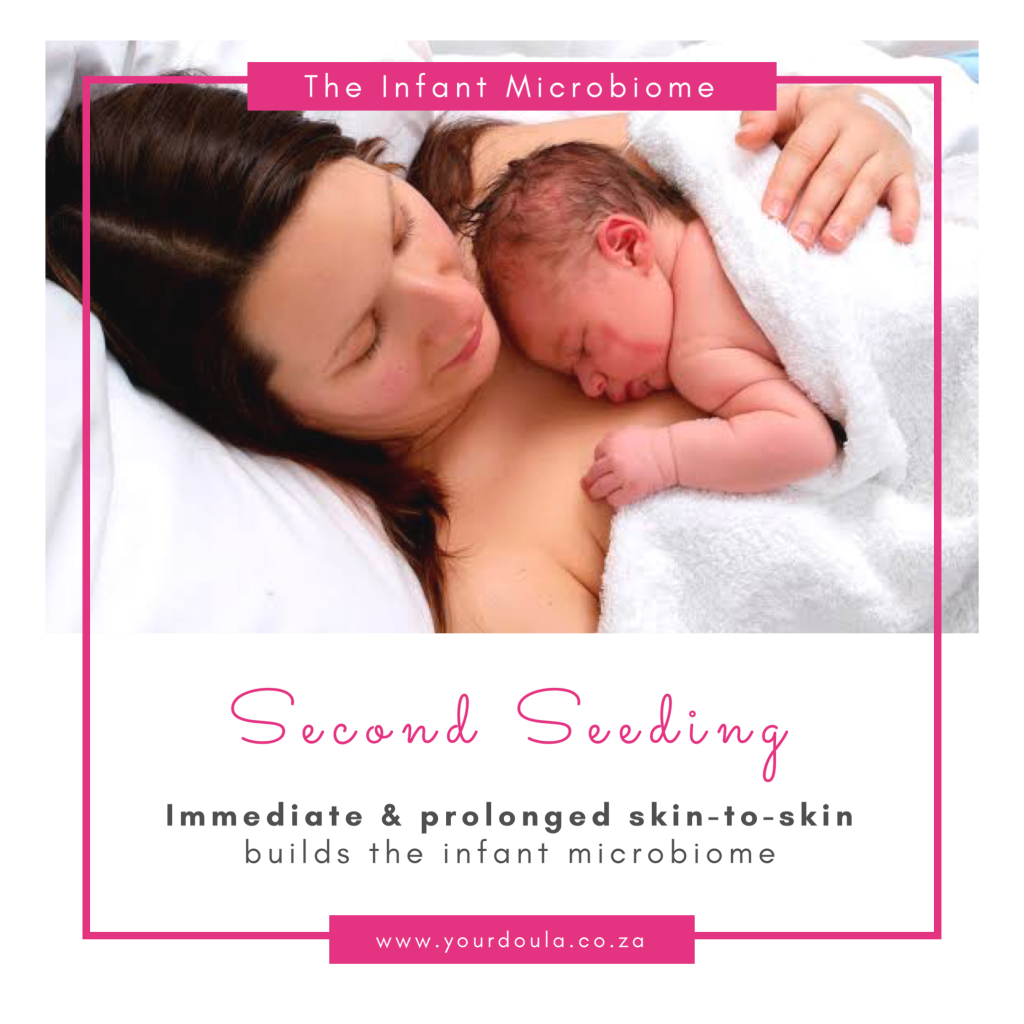 There are so many profound benefits of skin to skin during the immediate first hour after birth and the weeks following; it helps to regulate a baby’s body temperature, blood sugar levels and breathing, while stabilizing a baby’s neurological system and general emotional state, and further developing it’s microbiome.

During labour, a woman’s body temperature begins to rise; the release of hormones and extreme physical demands of labour cause this to happen. This rise in body temperature causes the woman to sweat, creating the perfect environment for bacterial colonies to rapidly multiply on the surface of her skin: warm and moist. Both good and bad bacteria multiply rapidly on the surface of her skin in preparation for the moment the baby is born and is placed directly on the mother’s naked skin.

Once the baby is placed skin to skin with the mother, the bacteria on the mother’s skin sticks to the vernix that is covering the new born baby. By delaying the baby’s first bath by between 24 hours and a week, you not only reap the benefits of the protective and moisturizing properties of the vernix for the baby’s skin and the hormonal, physiological properties for the mother, but it allows the newly acquired maternal bacteria to establish itself onto and into the infant’s skin creating a protective form of immunity for it, reducing the risk of skin rashes, inflammation, sensitivity and skin diseases.

This maternal bacteria is also transferred from mother to baby via the mouth, nose, ears and eyes when the baby begins to root for the breast during the first hour after birth. By nuzzling it’s face into the mother’s chest and licking and suckling at the breast site, the infant is acquiring vital bacteria that will enter it’s body and become an integral part of the gut’s microbiome, adding new forms of bacteria that are not found in the mother’s vagina or rectum which the infant acquired during the birth. By increasing the variety of bacterial colonies in the gut, the microbiome becomes more complex and established which is beneficial for the infant’s long term health. 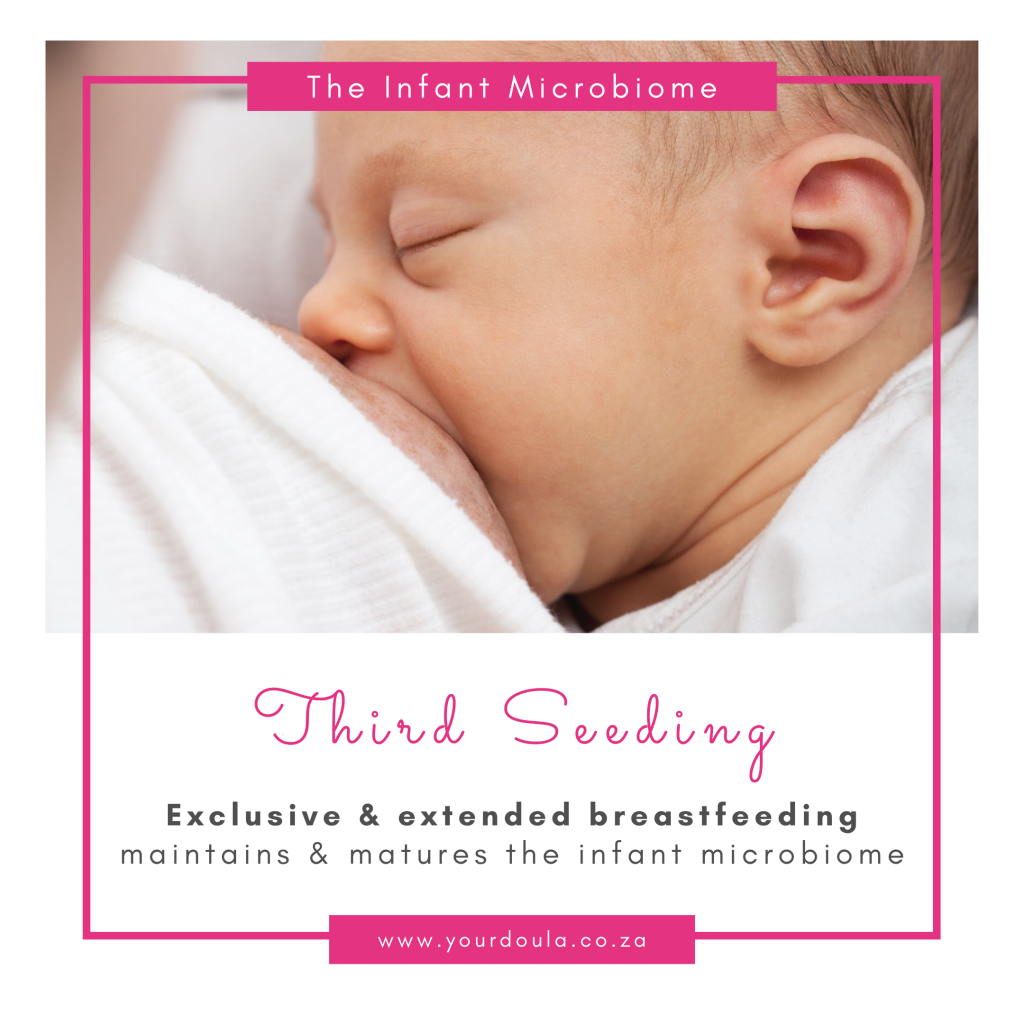 There are many benefits to breastfeeding for both mother and child, and one of these benefits is building, maintaining and strengthening the infant’s microbiome.
It provides a wide range of nutrition, immune components, hormones, anti-inflammatories, antibodies, and roughly 700 types of different microbes which are extremely vital to building the infant’s microbiome. Also, every time a baby breastfeeds, the added benefit of more skin to skin bacteria from the breast and nipple is transferred to the baby through the mouth, further building the microbiome.

Exclusive breastfeeding is vital for the first 6 months of an infant’s life, specifically because of their “open” gut. Good bacteria is needed in abundance to fill in the empty pockets in the gut that leave direct access for a bad bacteria to enter the infant’s bloodstream, and an infant will have this “open” gut for the first 4 to 6 months after birth.
Breast milk is intricately designed in a special way that one of it’s responsibilities is to coat the gut with protective enzymes which further helps to “cover” the empty pockets in the gut, preventing bad bacteria from entering into the baby’s bloodstream.
Supplementing with anything else but breast milk (water, formula, juice, solids) during this time causes severe damage to this gut lining formed by the breast milk, increasing the risk of bad bacteria entering the bloodstream and causing illness to the infant. This damage to the milk lining is caused from as early as the first supplementation.

Another incredible element to breast milk are the HMO’s (human milk oligosaccharides). These are special sugars that are found only in breast milk that the infant is completely unable to digest. So why are they there?
These HMO’s can only be digested by the good bacteria in the baby’s gut, acting as a type of “food” for the right kind of bacteria in the infant’s gut that was acquired from the mother during the birth process. By providing a source of sustenance for the beneficial microbes in the infant’s gut, these microbes are able to rapidly multiply and colonize the gut which helps to “crowd out” any bad bacteria while training and strengthening the baby’s developing immune system.

Visit my shop! I have an assortment of handwoven rebozos and unique, gentle aromatherapy products for your baby; all handmade with love and care.

1 thought on “The Infant Microbiome”